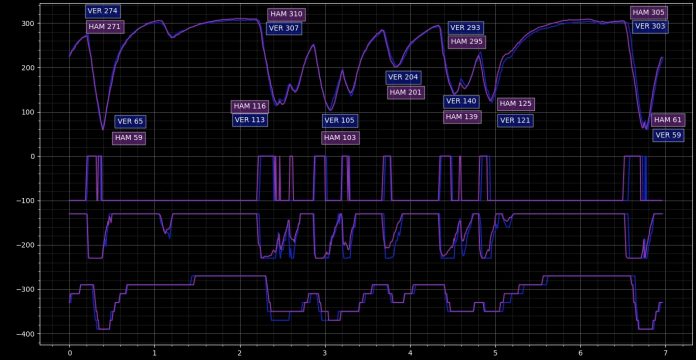 We all assume that it has been difficult for the F1 drivers to judge the track conditions today. Some may have taken it with greater caution and with priority to bring the car home in one piece, some, as George said, had less to lose and decided to go for it. Nevertheless, they all took a shot in tricky weather.

One of the first big things was Lando’s crash. It was a bit unfortunate because he was showing good speed in the wet and probably would have been in the battle for pole. Should he have been more careful as he was in a position to be the fastest? Let’s compare him to Lewis’ best effort in Q2.

From this F1 telemetry comparison and specifically the white line which represents an estimation of the live delta, we can see that Lewis is gaining on the long straights and at Pouhon is the huge differences between the two drivers. The delta of the minimum apex speeds is 35kph. It is quite obvious that the Mclaren of Norris is running more downforce.

F1-Another unfortunate event was the elimination of both Ferraris.

Comparing Sainz with Latifi, we can definitely see the trend – some opting for higher downforce and thus faster sector 2.

F1-As far as the teammate comparison at Ferrari, it looks like this:

Sainz is gaining on the straights, however, he has managed to stay pretty close to Charles’s performance during the middle sector. It is interesting to see that Leclerc is using bot more the two pedals at Pouhon. Apart from that pretty similar inputs, with some higher gear ussages for Charles and a small lift through Eau Rouge.

From F1 telemetry it was clear that Carlos was able to combat sector 2 pretty decently. This is why our estimations has more aero grip points given to him but we saw that he was gaining on the straight, so there are three possible scenarios:

The next figures represent their accelerations

Charles is quite a bit harder on the brakes, it is expected as he seems to have a bit more downforce.

It is interesting to see Leclerc trail braking more into T10. And also braking for T8, while Sainz only lifting. Overall they have pretty similar braking zones, with Charles’ fraction later.

Two surprising performances during Q3 were Sebastian’s and Daniel’s laps. Riccardo, lacking pace compared to his teammate, succeeded to put together the sector times and place him in front of Vettel.

Quite different approaches the two drivers have. On the major braking zones Daniel is using lower gearing. The two drivers lifting significantly through Eau Rouge, and T16, with Vettel more which loses him time all the way to T18. From our estimations, we conclude that Sebastian is possibly carrying a bit more “wings”.

Sebastian is braking later for Pouhon, the other braking zones are much closer. Vettel dabs the brakes at T14 while Ricciardo only lifts.

Now to the main talking point, namely the battle for the pole! Let’s see Max and Lewis compared.

Verstappen definitely carries more downforce but keep an eye on the traction grip, we will be able to see where that comes from.

Let us see the throttle inputs of the two drivers. It can be seen that the inputs of Max are more aggressive than those of Lewis, whose throttle application seems to be way smoother on traction. By doing so, he is able to climb on that throttle percentage way faster than Verstappen.

Eventually, we will take a peak at George’s performance today.

The most impressive thing is George’s Pouhon run – 12kph faster than a Red Bull who has opted for a higher downforce setup. He really went for it!

That extra aero which Russell hasm really gave him confidence to push and extract everything. It seems that he is lacking on traction which may suggest that the slow speed downforce generation on the Williams is not that great.