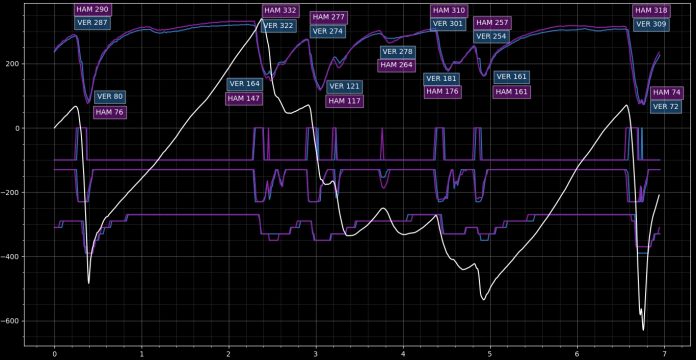 It was not a typical F1 Friday. Changing track conditions, different setup approaches, spins, and few tangles with barriers. Moreover, the top teams seemed to run different engine modes and/or fuel levels. All this did not help us, the fans, to understand the whole picture, but let us try to clear this situation by looking at some telemetry data of drivers’ fastest laps.

Starting with the battle upfront. The white line on the figure represents the live delta between the two drivers. We can definitely say, by ooking at the live delta and the top speeds, that Hamilton and Verstappen are running different engine modes. Lewis is gaining a lot on the straights. However, sector 2 is where Max has a strong advantage during his lap.

Through Pouhon Lewis even dabs the brakes, while Max is lifting way less. Turn 8 is where the Mercedes AMG F1 TEAM driver is using a lower gear, possibly to combat some understeery moment. Turn 15 is another interesting place to look at. There, this time, Verstappen is seeking lower gearing while Lewis is slightly double pedaling. This technique is used when a driver is searching for mid-corner stability.

Although the results from FP2 are not at all conclusive. We can say some things about how the top teams perform. Our estimations say that Red Bull are currently running the car with more grip, and the Mercedes AMG F1 seems to be better on traction and also braking better. We can also clearly see that Bottas is running less aero which affects the oveall cornering.

Although the speeds, compared to the differences between the top teams, are closer between Ferrari (click here for the Fp2 on board analysis) and McLaren F1, we can see the trend. Sainz going with lower downforce setup than Lando. Carlos’ second lift at Pouhon definitely doesn’t help his performance through the second 2.

The grip estimations confirm our guess that Ferrari opted for “easy-to-overtake” setup. The only part where Sainz is maximizing his performance compared to Lando is the braking grip.

At the section Turn 11 – Turn 12, there is a big difference between the drivers’ speeds, possibly a mistake by Alonso that has put him in the position of chaser. Other than that, the main strong side of Alpine’s driver during his lap was the straight-line speed. Lacking around a tenth up to the braking point of the bus stop chicane, he manages to outperform Pierre Gasly, gains back some more time and gets in front. Pretty similar gearing usage by the two.

Alpine’s car lacking grip. It seems that Alpha Tauri F1 has the better package at the moment but let us see how the weekend develops.