Where do Vettel’s difficulties come from? 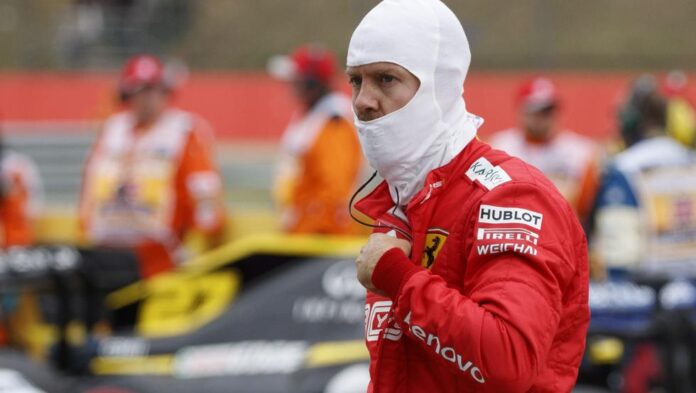 Round and round we go, but we always go back the famous quote: “Here at their home” when Vettel, a year ago, celebrated the victory in Silverstone, home race for Mercedes and Lewis Hamilton. Two weeks later, in Germany, at his own house, the disgrace happened, with Vettel hitting the wall, and the victory to Lewis Hamilton, started fourteenth. Ever since, the only lightning, and what a lightning, was Spa, then nothing. It’s 18, the number of Grand Prix without victories for the four-time world champion, so…Where do Vettel’s difficulties come from?

The 2014 Formula 1 season is still considered the worst in Sebastian Vettel’s career. Only a fifth position in the World Championship, and after all, the first and the only time that the four-time world champion ended the year behind his teammate, in that case Daniel Ricciardo. A year of important difficulties with the German who actually considered retiring, as stated a few months later by Chris Horner, his former Team Principal in Red Bull: “Sebastian did not like the rules change: the new engines, the driving sensations , the brake by wire, the reduction of aerodynamic downforce. You could say he wasn’t happy. In addition, Ricciardo’s victories worried him, he didn’t enjoy it any more. He was like a child whose toy was taken away. ‘to metabolize it’, he spent a period of disillusionment with the evolution of F1, he thought whether to continue or not “.

I like to start from here: the similarities between 2014 and 2019: back then Daniel Ricciardo, today Charles Leclerc, who better adapted to the car and to the regulatory change. Yes, because if the differences with the Australian driver were to be found in the complicated adaptation of the four-time German champion to the behavior of the RB10s, in this season the problems are similar. Returning to 2014, the main problem concerned in particular the the brake-by-wire system.

To confirm this theory even the Red Bull leaders said: “The lack of downforce at the rear compared to the cars of past years, together with the introduction of the brake-by-wire system, have removed those excellent braking feelings that Sebastian used to love” said Horner. The brake-by-wire forced the drivers to change their driving styles as well; there are those who managed to learn quickly, but for Vettel it was more complicated because for him it was important to feel the rear axle. That rear axle that surely has become “lighter” toghether with the abolition of blown exhausts. Overtime, Vettel has improved a bit his feeling with the RB10, yet again he has never managed to adapt to his driving style, and this has certainly conditioned him a lot in the internal comparison with Ricciardo.

Five years later we’re lookting to a less obvious situation, but “similar”, at least the one that has been created in the last month. Ferrari initially brought a car to the track, the SF90, with a very light front that generates enormous understeer and a rear that is more stable and efficient. Vettel is competitive, considering the big technical limits of the car. As soon as Ferrari starts to shift the balance towards the front, lightening the rear, in a situation that can be called “short blanket”, Vettel loses performance. I’m talking about the French Grand Prix and the GPs to follow, where Ferrari introduced new features on the front axle of the SF90 (front wing, nose and turning vanes), not followed by as many upgrtates on the rear of the car (mainly the diffusor).

Experiments have been made at Silverstone by introducing some mechanical improvements to the rear that have not delivered the desired results. But other changes were planned. Ferrari needs more time to rebuild the whole puzzle of a car that should be redesigned from scratch. Binotto will never admit it, but this is the case. Much work is being done, in a way that is not very obvious by amateur eyes: the understanding of the rake arrangement according with the upgrates at the front. The goal was to obtain more important data on a very complete circuit like Silverstone, to fully understand the innovations introduced in France and Austria.

This is why many new features have been postponed. Subsequently, between Germany and more likely Hungary, a new aerodynamic step will be introduced. The Maranello Team technicians are trying to change the aerodynamic concept of the SF90 during the races, in small steps, without redoing the car. But as long as the Italian Team continues to focus on the front understeer, penalizing the rear of the SF90, it will be more difficult for Vettel to express its true potential.

Leclerc manages a more “nervous” rear because he has a more neutral driving style. Vettel doesn’t. The Monegasque has a guide more similar to Michael Schumacher. He prefers the oversteer and a car more “pointy” on the front, which he accurately turns into the inside of the curve, even if it means to correct the possible oversteer of the rear axle (he would be, in short, very comfortable on the Mercedes W10). Everything has an impact on braking, where it is very different to have a well-planted rear more than a “nervous” one. So much infact that already during the pre season tests, Leclerc publicly highlighted this: “The major differences between Vettel and I are on the brakes. We have very different driving styles ”.

The German driver, as understood by FUnoAnalisiTecnica, loses time compared with his team mate since the France race in the braking area. In France but also in England, in the most driven sectors Vettel has made enormous effort, as you can see from the image above. Something that is “highlighted” in qualifying conditions, when you are close to the limit and there is little fuel in the tank; the differences are less evident in race conditions where, especially in the first part, the fuel load “helps” to stabilize the rear of the SF90.

Both Silverstone and the Paul Ricard are two circuits in which it is necessary to protect the front axle more, therefore the issues that Vettel is facing are certainly accentuated. On other hands, the next two appointments, Germany and Hungary, could slightly attenuate them, by being more “rear limited” tracks. The rear axle will have to be protected, inducing some understeer on the front and then shifting the balance further to the rear. This theoretically. Hoping for some help that will come from the upgrates initially planned for Silverstone, and only a few days before postponed. Hoping to give that “click”, like our Giuliano Gemma likes to call it, not only to the performance of the SF90 but also to Sebastian Vettel.