Wolff vs Horner – the other side of the title fight 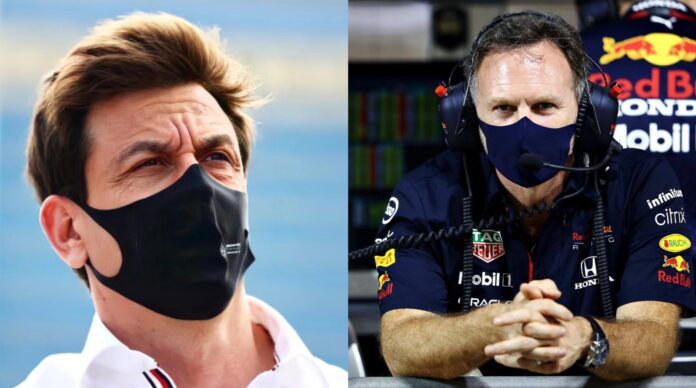 Toto Wolff is well-known for his dramatic reactions to defeat, from flouncing punches to the table to vitriolic declarations on TV. Lewis Hamilton missed out on a potential win at the race restart of the Azerbaijan GP and ended up not scoring a single point. On the other hand, Valtteri Bottas never managed to be up to speed across the three-day weekend in Baku.

“It just feels painful. You can see we had the win, we had the hand almost close to the trophy, because Max didn’t score. It’s just emotion of frustration. It’s just so overwhelming at the moment. What I take away is that we must bring our A-game to fight for this championship. And our car was not there all weekend. Operationally we just need to perform faultlessly and all of us haven’t done that the last two weekends.”

Wolff’s frustration surfaced as he faced the media after the race and criticized the whole team. Undoubtedly, Mercedes has entered a downward spiral since the Monaco GP, from Bottas’ pit-stop disaster to Hamilton’s costly mistake in Baku.

But aside from the racing, there is a deeper and subtler war that Mercedes and Red Bull have started. And no, it is not based on the flexi-wings matter.

Wolff’s ‘windbag’ comment on Christian Horner is just one of the several tools the two keep using to poke each other. Their war of words is now hitting on a personal level that embitters the fight between Verstappen and Hamilton. The way Horner underlined that Wolff roasts his own team adds fuel to the fire of a weaker version of the Mercedes team boss.

Clearly the press is instrumental in further developing and seasoning this intense rivalry with little digs and unpleasant comments. Both team principals are fully taking advantage of it and, ironically, their unsettled differences benefit both teams and the title fight itself.

This trickle-down effect also involves Liberty Media, as being able to rely on an additional storyline to develop in parallel with the main title fight keeps a high level of attention throughout the whole season.

Unfortunately, the V6 turbo era has lacked this sort of dynamics, despite a few timid displays in the recent years (honorable mention for Cyril Abiteboul and Otmar Szafnauer). On the contrary, Sebastian Vettel’s winning seasons (2010-2013) were particularly enriched by disputes on the technical side as well as on the personal side.

The German and Fernando Alonso, the other title contender often portrayed as a heroic underdog, embodied actual characters with specific features. However, the best part is that their rivalry, especially in 2012, was compellingly loaded with controversies on the technical and sporting side until the very end.

Such an impactful combination of different factors became quite incomparable, but the Wolff-Horner beef might be the game-changer Formula 1 needed as far as engaging storylines.