Sainz on board analysis – Bahrain 2021: caution may hurt 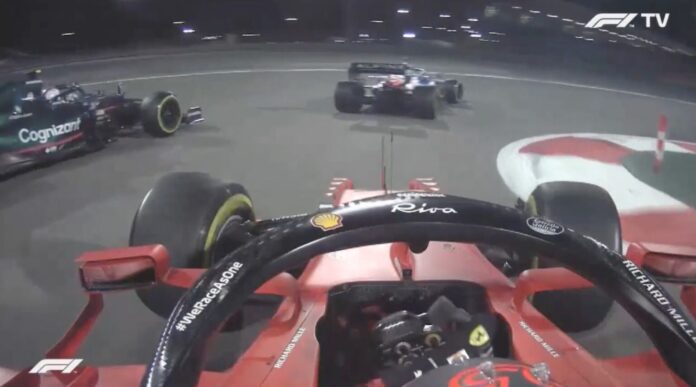 Sainz on board analysis – Bahrain 2021: caution may hurt

Yet another Spaniard riding the “Cavallino Rampante”. The third one, to be precise, after Alfonso de Portago and Fernando Alonso. Despite his young age, the climb of the Madrid-born driver is motorsport has been consistent. Sainz lands in Maranello seat thanks to numerous strong showings on track. Fast, clever and talented when it comes to overtaking. We already know a thing or two about the resume of Ferrari’s newest acquisition. Carlos didn’t come to Maranello to be number two, it’s not in his DNA. On the contrary, his ambitions match his teammate’s ambitions: pushing the Italian team, with an extremely clear personal target: becoming world champion with Ferrari.

Ferrari’s strategy, as it did with Charles (read here Leclerc on board analysis) opted for the Soft tyre at the start, a decision taken by default, without even trying to qualify on Mediums in Q2. The tension for the first drive of Carlos at the wheel of the Italian car was palpable. With the car off on the grid still on the kickstands, about 5 or 6 minutes before the formation lap, Sainz had already asked for several information. The Spaniard wanted to review with Adami the various procedures for the formation lap. Moreover, a few minutes later, he asked if he should cool the car before stopping on the slot. Firm handshake and adventurous look. Thus began the history of the Spaniard at Ferrari.

After the abortion of the start due to Perez’s problem, the Ferrari driver works on the front wheels zigzagging like crazy. Then five burnouts before placing on the eighth grid slot. Although the clutch release is actually good, Alonso’s is undoubtedly better. The Alpine driver throws himself on outside in turn 1, enjoys a better exit trajectory and manages to overtake Sainz. The Madrid-born driver then tries to regain the position, as he has the slipstream from Fernando and gives it all in into turn 4. But that 39-year-old knows better and easily keeps the Spaniard’s return at bay. In the meantime, Stroll takes advantage of the situation.

The Canadian’s excellent traction thwarts Carlos. After not even one sector, number 55 has already lost two positions but then Mazepin crashes into turn 3. Safety Car. The first of the season. Bernd Mayländer shows off the new suit, showcasing the British racing green of the Aston Martin Vantage. After the procedures to keep the tyres warm and some info on the car, the race finally resumes. In addition to the brake balance reset, the new Ferrari driver is reminded of the use of the hybrid during the first lap: K2 ON up to turn 1 and then maximum power of the K1 Plus for the entire lap.

The restart does not lead to changes of position. Carlos catches Stroll and follows him closely. At the hairpin of turn 10, the Spaniard bravely throws himself into the Canadian. Clashing is inevitable. Fortunately, the front right tyre does not suffer any damage, as well as the front wing. While the AMR21 number 18 pays the price, losing a small bargeboard band (orange circle). A worried Sainz then opens the radio.

He is in fact concerned about any damage on the car. The new Ferrari driver underlines more than once a potential collision with the front wing. The pit wall takes note of this, carrying out the necessary checks. In the meantime, the Virtual Safety Car is rdeployed following the contact between Gasly and Ricciardo.

Visibly worried, Carlos again asks for a complete check-up of the car, as he informs the team that he deliberately passed by the wall to give a “live view” of the car to the men in red. The race restarts and Sainz is finally reassured about the state of the car.

Thanks to the dashboard on the steering wheel, you can see how the tyres take several laps to enter the correct window of use, with the rear axle struggling the most. Nevertheless, the Spaniard is satisfied with the performance of the compounds. In this regard, Adami asks for a reset on the phase update. Observing Sainz’s pace for a few laps, his good pace becomes evident, with the cars in front of him looking slower. A few laps later, the Ferrari driver confirms it.

From the wall they let him know that they had already noticed the best pace of his SF21. A few kilometers later Alonso (P8) pitted, while Adami informs: “5 more laps”. In these laps that divide the number 55 from the first stop, he is asked to push. On the other hand, the “ferrarista” driver wonders about his pace. From the pit wall they let him know that it is very good. A few more seconds and the Ferrari pit wall asks Sainz a question.

After a very short briefing between the driver and the engineers, where the Madrid-born driver announces that the compounds are not worn out yet, the decision to postpone the stop for a couple of laps is made by mutual agreement. In spite of this, frightened by the possibility of ending up behind Kimi, the strategists of Maranello call Sainz back to the pits. The tyre change is not the fastest but, all in all, it goes smoothly. With a brand new set of Mediums, Carlos is back on track ahead of the Finn, with a 2s advantage.

At lap 16, Sainz finds himself in eleventh position. Adami immediately asks him to keep an eye on the compounds, ordering the Soc 6 hybrid mapping. The 3-second gap on Alonso is quickly closed. However, there is an exciting three-way fight in front of him: Vettel, Stroll and Fernando engage in a fiery battle. The Canadian puts behind Sebastian who, caught off guard, also loses his place on the Alpine number 14. But the German fires back and in turn 4 overtakes the Spaniard. In all this, Carlos watches closely, ready to attack.

Taking advantage of the battle, the Ferrari driver pulls the trigger and overtakes Sebastian on the inside of turn 1, takes in Fernando’s tow and passes him in the braking corner of turn 4. Olè! Adami, in addition to the brilliant move, congratulates him on the excellent tyre management. In the next 2 laps Sainz runs in free air, with Perez becoming rather threatening behind him. Although the use of overboost is allowed to defend himself, the Mexican will catch up with Ferrari and pass it at turn 4.

The Iberian opens on the radio and comments on Red Bull’s better traction. From the pit wall they come in aid by reassuring him. They ask him to concentrate on his own pace, forgetting about the RB16B which, in the current state of things, is clearly superior. Two laps later, given the excellent management of the Soft tires, Adami suggests a slightly higher race pace. This is as soon as the temperatures return to the window. The pace on the yellow band Pirelli is good and in just 2 laps the gap on Stroll is closed. The duel between the two, however, does not arise, as Lance is called to the pits. On lap 30 Sainz finds himself in eighth position.

Adami asks the Spaniard for an update on the status of the car and congratulates Sainz once again on the pace: “Pace is really good”. While two laps later he informed the former McLaren about the stops of Ricciardo and Leclerc, issuing a very clear warning: “Head down … it’s a crucial phase of the race”. Not even time to think about it and the Italian engineer is still showing up on the radio. The request is always the same: “Give everything you have for the next 5 laps”.

In this phase that precedes the second and last stop, the Madrid-born driver is doing really well. The trajectories are drawn. Aided by a Hybrid mapping set on Soc 5, which allows to use an amount of energy equal to or slightly dissimilar to that produced, he laps on an excellent pace. At the end of the 5 laps, number 55 is called back to the pits.

Sainz is rejoins the track on a set of Hard tyres. Average tire change: 2.7 seconds. Arriving in curve 1, with cold tyres, the rear of the SF21 swerves. Fortunately, Sainz’s reflexes are good and the car does not spin. On lap 48, Carlos is in ninth position. After the last stop, the goal is to get Stroll. The AMR21 should be reached in 9 laps according to the calculations of the Ferrari pit wall. In the following laps, laptime and gaps on the Canadian are the hot topic on the radio, until the Spaniard is informed that he can push a little more in turn 12. As he approaches the Aston Martin, the details on his driving increase. There are several changes on the differential gear in corner entry, followed by some changes to the brake shaping, to manage the balance under braking by working on some parameters of the brake-by-wire system.

Four laps earlier than expected, he can see Lance’s car exhaust. The Ferrari driver passes Stroll with ease on the main straight. With ten laps to go, SF21 number 55 stands in P8. Adami wastes no time and encourages the Spaniard. The last realistic target is Ricciardo’s McLaren. A laptime is thus set to be able to catch the Australian before crossing the finish line.

The Italian engineer continues to push Carlos, congratulates him on the fantastic lap he has just completed and wants him to keep up the good work. Then he informs him that two lapped cars could favor him. There are only 5 laps that separate Sainz from the finish line, while a papaya silhouette finally appears. To help the Spaniard, during the last two laps, the Ferrari pit wall allows the use of a more intense hybrid mapping. However, the battle between the two will never begin. In fact, Ricciardo is very skilled in keeping the SF21 at a safe distance.

Sainz’s first race with Ferrari therefore ends in P8. Overall such a result can be regarded as satisfactory, although you would normally expect different results from the historic ‘scuderia’. However, Carlos did a good job. Too bad he was overly cautious during the first lap. In fact, in hindsight, he had the pace to fight with Charles…