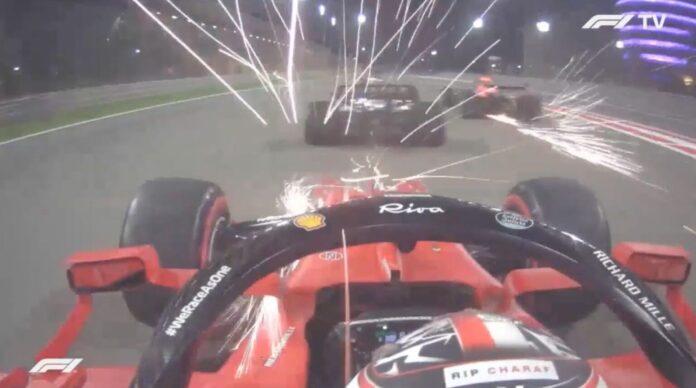 The 2021 season is Leclerc’s third one in Maranello. The Monegasque is a top driver, by all means. He proved it long before reaching the Cavallino Rampante, although he has never raced on a winning car thus far. If we look at the current situation in 2021, it must not be easy for him, knowing that his chances of winning a race are still very slim. Especially if his talent can match a driver who, with seven world titles already in the bag, is still racing on winning ways. A few podium finishes can be targeted, if the stars align. Who knows… I cannot rule it out for sure! However, Charles is a real Ferrari fan. What matters to him is winning on a “Rossa“. This motivates him to take hits, work hard and keep fighting. His target remains the same after all: winning the championship with Scuderia Ferrari.

The Italian team put in a considerable effort over the winter, spending the two tokens allowed by the FIA on the rear. Changes to the gearbox made it possible to modify the kinematics of the rear suspension. As a result, the SF21 is a more stable car in the rear. The work done on aerodynamics has improved flow management, correcting the unsatisfactory behavior of the SF1000. Additionally, we must consider the horsepower of the 056/B power unit, essential for producing a good performance.

Thanks to the horsepower of the new engine, the car can sustain more downforce. Last season, the power deficit forced the Maranello engineers to reduce downforce to compensate for the speed gap. This factor caused a great imbalance on the setting, forcing Ferrari drivers to “row” on the steering wheel. On the contrary, the new car now enjoys a good basic balance, which finally allows the Italian engineers to find the ideal set-up much more easily. This will help Charles and Carlos (read here Sainz on board analysis) significantly throughout the season.

No doubt. At Ferrari, after analyzing the data collected on Friday, they decided to focus on Soft compounds for the start. Carried out in FP2, Charles’s race pace simulation highlighted good management of the Pirelli red-banded compound. The intention was to start aggressively, trying to get past at least one car at the start. During the installation lap, a lot of work on the steering wheel to bring the front axle up to temperature, added to the usual procedures for approaching the starting grid. This is an operation that everyone had to repeat twice, given the problem that nearly took out Checo Perez before the actual start of the race.

Five burnouts and off Charles goes, from the fourth slot on the grid. His first clutch release of the season is very, very good. Charles has a better start than Valtteri, but it wasn’t enough to get past him at turn one. However, the Monegasque knows better. He takes advantage of the tow from car n.77 on the straight leading to turn 4 and forces Bottas to protect the inside. Then he throws himself outside, traction better, and puts it in acceleration. The Finn tries to hold on, in vain. The overtake is closed.

Four corners later, Marcos says on the radio: “Safety Car deployed”. Bernd Mayländer‘s stint will not be long, just to restore the starting conditions after Mazepin’s spin and shunt coming out of turn 3. Behind the brand new Aston Martin Vantage the work is always the same: keeping the temperatures of the compounds high. For the restart, the Spanish engineer reminds Charles to leave K2 active up to turn one, and then use the maximum power of the overboost with the K1 Plus. Lap 4, we start again.

Charles takes advantage of the tow on Hamilton, by throwing himself out in turn 1 but he doesn’t succeed. He is still third, with the exhausts of the W12 in front of him. Half a lap and here we go again: “Virtual safety car deployed”, owing to the collision between Gasly and Ricciardo, leaving debris on the track. Three kilometers later, the race resumes thanks to the speed of the Bahraini marshalls. Shortly after, Bottas doesn’t think twice and knocks Charles out with the help of the DRS, closing the overtake at the end of the straight. Small note: up to now, looking at the dashboard of the Ferrari driver, his tyres have not yet warmed up.

At this point, shades of the past season reappear. There are 3 cars behind the SF21. All of them are threatening. In this respect I would like to say a few words. Perhaps my expectations were higher than they should, but the recovery of hybrid energy did not seem to be at the top. If the consistent increase in horsepower on the Italian PU is undoubtedly evident, I expected a little more from the use of the hybrid part. Returning to the race, Marcos immediately runs for cover. The Spaniard asks Charles to move the SOC (state of charge) face to the value 8. As we now know, combined with the K1 Plus, this mapping allows you to maximize the use of the hybrid.

The Monegasque manages to fend off Norris thanks to the use of the DRS. In the second, the next lap, he shrugs off the threat again. It is curious to note that in this phase the front axle is in temperature and the rear one is still not. Unfortunately, however, the energy runs out. Switching to Soc 9 before the DRS zone to recharge the hybrid means paving the way for the British car. Lando can now overtake Charles in turn 1 and take fourth place.

Just for the record, Leclerc tried to take the position back but he was unsuccessful. While Ricciardo tries to emulate his teammate, the Ferrari pit wall asks for the first tyre phase update of the race, which allows to have access to all the values regarding the tyres. In this phase, Marcos congratulates the Monegasque on his tyre management. A couple of laps after, once the hybrid is charged again, Charles reverts back to the SOC 8 mapping.

While the Ferrari driver is busy keeping Daniel’s McLaren behind, he is questioned about a possible modification to the front wing. The “front flap ok” in response confirms that the SF21 number 16 is balanced. Half a turn later you are asked to position the Multifunction lever on the Spark position. Usually this command precedes the call to the pits, which actually arrives while entering turn 13.

At lap 14, Leclerc rejoins the track in P14, behind Norris and pressed by Alonso. His second stint will be on Mediums. Pit stop is quick. He switches to Soc 6 and then 7. Latifi, who was yet to pit, is rapidly overtaken by the McLaren. Charles overtakes the Canadian at turn 4. A few kilometers later and he switches to Soc 9 to recharge the hybrid, even if the Monegasque does not seem too happy on the radio. Furthermore, he is asked to reset the parameter linked to the compound data. In the meantime, having not made the stop yet, Vettel finds himself behind car number 16. The German is agitated. He opens the DRS, takes the slipstream and throws himself into the Ferraris in curve 1. Excellent. Leclerc’s defense pushes the attack back to the sender. The battle between the two former teammates is extremely hard-fought, yet fair.

On lap 19, Charles finds himself in P6, sandwiched between the two McLarens. Marcos opens on the radio and asks to improve the apex in turn 11. The will to have the two on Lando is there. Unfortunately, however, the pace of the Englishman is slightly faster and the papaya-colored car gradually moves away. After the third tyre phase update of the race, tyre management very similar to Norris’s is confirmed. Following an adjustment to the brake shaping, the Monegasque is asked to look after the tyres in turn 12. Leclerc is pushing hard to keep the pace of the young Englishman. At session 27 a front flap update is requested. The Ferrari driver, still happy with the balance, informs the pit wall that he will not change the angle of the front wing during the next stop.

Marcos again, again on the radio. This time he asks the Monegasque to focus more on turn 2 and 3. Charles is also informed that he is pushing a little too hard at turn 1. These comments are extremely precious and useful to save his tyres and not to compromise his race pace. In the following laps, team radio dialogues are entirely focused on the laptimes Charles has to keep compared to his rivals.

In the meantime, Bottas has made his second stop, returning to the track behind Leclerc. The pace of the Finn is much higher than that of the Monegasque. In this regard, approaching the end of the second stint, Charles opens up on the radio. The message is clear: he does’t want Mercedes to take the position on him. The goal is to make the second stop before the Finn reaches him. For this reason, four corners later Marcos calls Leclerc to the pits. The Italian mechanics took 2.4 seconds to assemble a fresh set of Hards. As Charles returns to the track in eighth place behind Tsunoda, he is asked to turn off K2 after Turn 4 and to try to take care of the newly fitted Pirelli white-banded compounds.

Shortly after, the Ferrari driver is informed that he will have to fight with Perez. The Mexican, author of a great recovery from last place, is maintaining a really good pace. In the last stint of the race, the same scenario is repeated for the Monegasque. After the pit stop of the young Japanese talent, the Ferrari driver still finds himself behind Norris.

The intention to attack the British is there. In this regard, to try to improve his pace, the Spaniard points out to Leclerc that he is losing time, compared to Lando, in the braking of turn 4. Furthermore, the minimum speed in turn 11 is too low. Shortly thereafter, the Perez issue was clarified. After the stop of the former Racing Point driver, the prediction of the Ferrari wall is to find RB16B number 11 at his heels during the last 5 laps. We are on lap 40, with 16 still to go. Tyre management is spot-on. Charles doesn’t speak for a while, he just confirms certain messages from his engineer.

After he lapped a couple of cars, concentration is very high with ten laps to go. His target is to obtain the best result possible. His fight with Perez, at a distance, is however consuming. The Mexican’s race pace is relentless and his getting into the head of Charles, lap after lap. The Ferrari pit wall seems to be on point today. In fact, as they predicted, with five laps to go, Perez’s Red Bull vehemently catches Leclerc on the straight.

Although it was suggested on the radio, the attempt to maximize the use of the hybrid with Soc 8 mapping is useless. Checo easily overtakes the Ferrari, conquering fifth place. But the Monegasque fires back proudly and  takes the slipstream, swerves to the right, even exiting the limits of the track, and throws himself on the inside of Turn 4. Although he manages to turn first, better traction rewards the Austrian car that regains the position. The number 11 RB16B is now ahead.

As a matter of fact, the first race of the season ends here for Leclerc. Compared to the previous season, a significant leap in performance has been made. No doubt about it. However, a well-deserved sixth place does not seem to fully satisfy the Monegasque.

In short, good but not great…

Lightning, Stars Waking Up as Surprise Teams Level Out